Harley-Davidson Announce their E-Bicycle … Who’s Next?

Harley-Davidson has a long and illustrious history: It’s one of a handful of brands to survive the Great Depression, various ownership deals, subsidiary agreements, phases of declining financial health, and fierce international competition to claim the title of the world’s largest manufacturers of motorcycles and to transcend from a motorbike company to a lifestyle brand.

But is this just another case of “me too!” or is this a serious contender entering an already crowded space? Should the likes of Vanmoof, Cannondale, Ribble and Cowboy (to choose a handful of the 100’s we could have mentioned) be worried? Or is this just a passing trend?

All In Favour: Harley is a serious e-bike business

Brand Equity: The biggest factor in Harley’s favour is alluded to above: Harley Davidson is no longer “just” a bike company … its an iconic and loved brand. The reasons for this are outside of the scope of our discussion here, but when people from all walks of life are willing to tattoo a corporate logo on their chest, it’s worth paying attention. Harley isn’t just respected … it’s loved. Utilized correctly this brand equity will be a hugely powerful motivator and bring new people into the mix.

Distribution: Harley might be entering into a crowded space, but their reach is already global and can be put behind this. Showrooms in everywhere from LA to London and Dubai to Dakkar will soon have e-bikes from Harley proudly on display

Supply Chain: If Harley are serious about this (which we assume they are) their pre-existing supply chain can be leveraged quickly and effectively to produce the volume that will be required. This isn’t a small feat and is an incredibly valuable asset in its own right.

All Against: Harley won’t get traction in an already complicated space

Production Problems: Just 2 weeks ago Harley had to issue a recall for their first “e” offering as Livewire’s (Harley’s electric motorbike) started seeing unexpected shutdowns. This is compounded by production issues faced last year and points to a manufacturing process that has perhaps struggled to swap from gas to electric. Its certainly true that every new product has its issues and selective recalls are not unusual, but retooling manufacturing at such a grassroots level is a challenge.

The Who’s Next Factor: Harley’s competition in the e-bike space is fierce, but (relatively speaking) Harley is a 300lb gorilla on any metric you want to choose. VanMoof rightly celebrated $40m revenue in 2019 … Harley did $5.36 billion. That begs the question … why are we putting this in the negative list not the positive list?! Simply put: Harley are huge in comparison to current e-bike providers, but small in comparison to others who could enter the space … VW: $250+ billion revenue, Apple: $260 billion, Walmart: $514 billion, Toyota: $275 billion.

Market Fit: e-bikes and e-scooters are innovating constantly, but is that innovation in the right market sector? With offerings appearing everyday for $1,000++ we can’t help but feel that we’re not seeing the traction where its truly needed: the emerging economies where mobility doesn’t truly exist. If Harley wants to be successful at the level that billion dollar companies are judged by they need a mass market product … and that means a product affordable within rural India and China vs London, Paris and LA.

Our perspective is “watch this space!”, but we’d love to hear your thoughts! At the end of the day innovation within the sector is needed and wanted, but we’re mindful that the innovation needs to happen at the lower end of the market and not just the luxury offerings. A range of amazing $5,000+ e-bikes are phenomenal and welcome … but a range of serviceable e-bikes for $50 would be the game-changer that would impact billions. 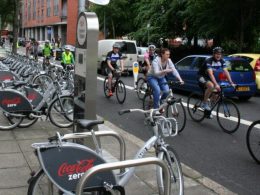 The pandemic stay-at-home orders shook up everyone’s normal office routine, including the commute now reduced to a few…
bySara Jones

The Lime App Gets Friendly – adds Rival, Wheels to the Platform

Already the largest provider of shared micromobility services worldwide, Lime has decided there is more room on the…
bySara Jones

Last Mile Logistics – One Key to a Decarbonised Future 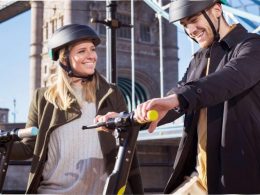